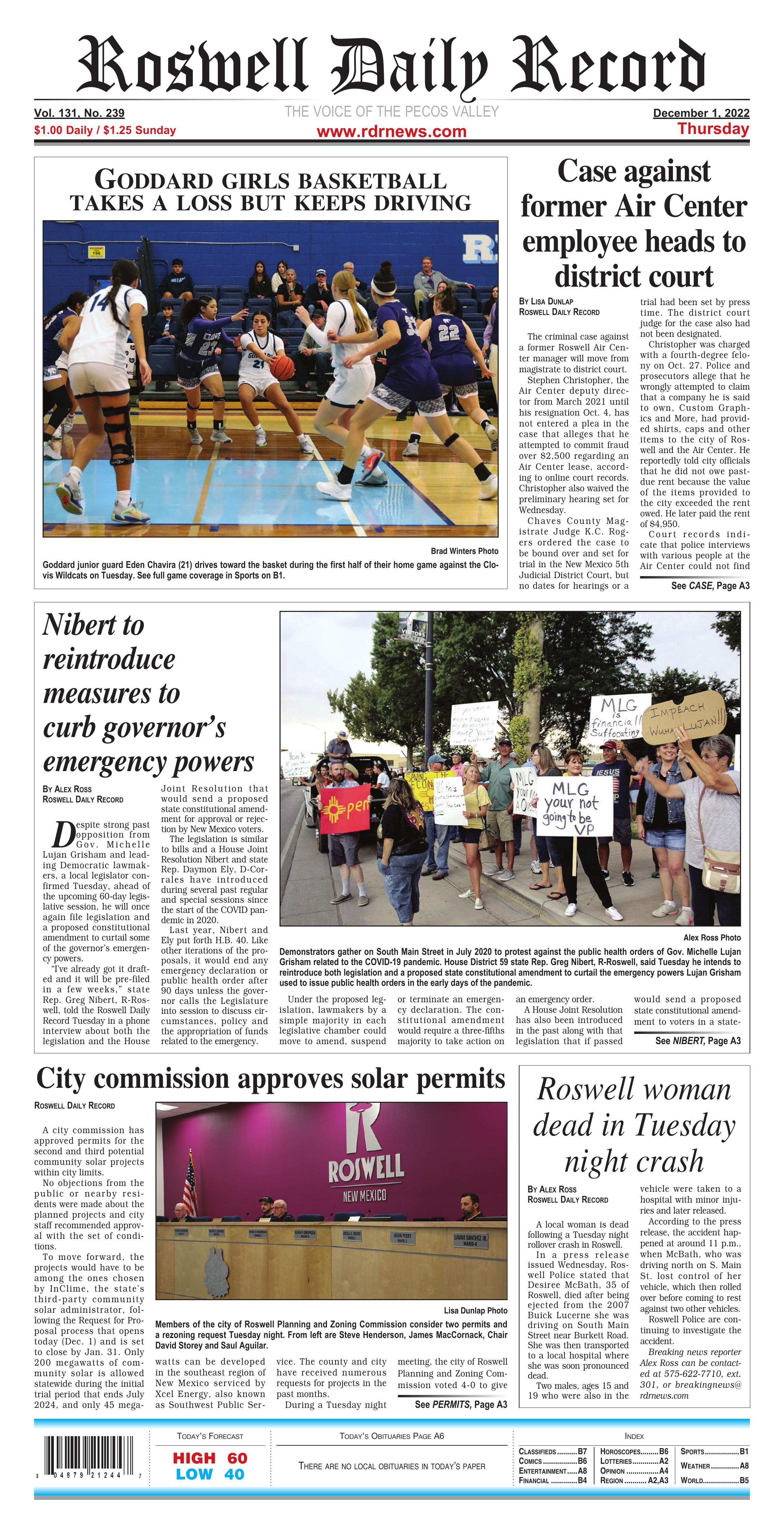 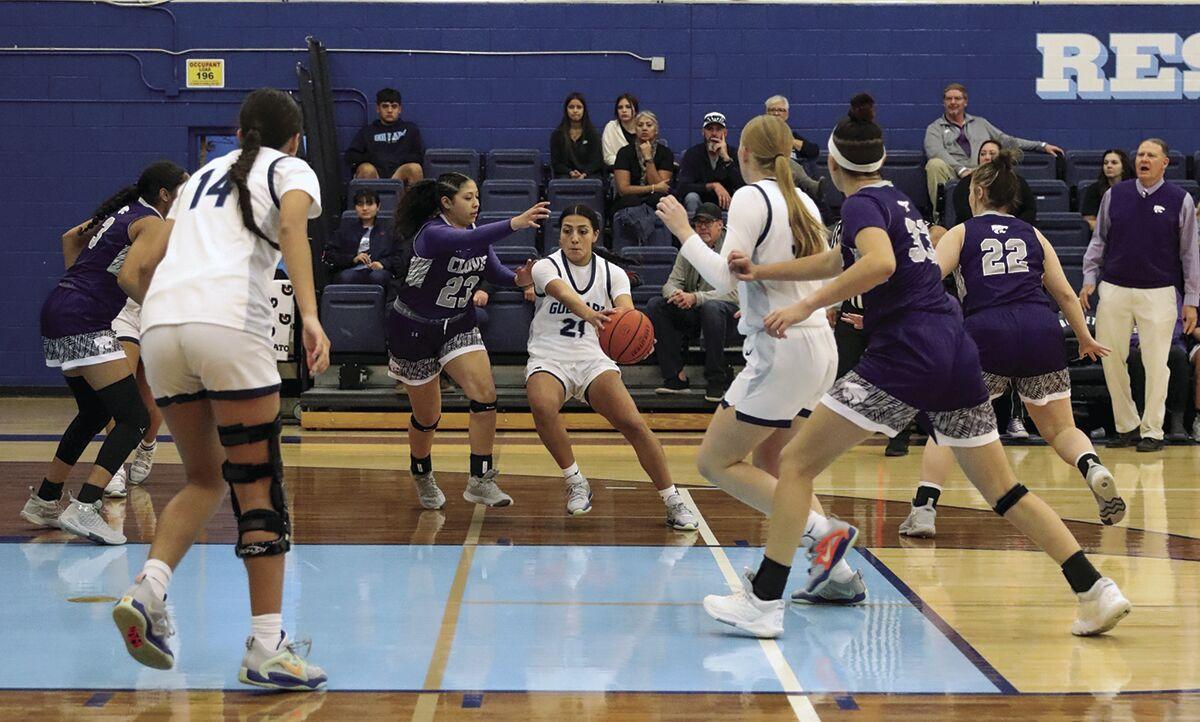 Goddard junior guard Eden Chavira (21) drives toward the basket during the first half of their home game against the Clovis Wildcats on Tuesday. See full game coverage in Sports on B1.

The criminal case against a former Roswell Air Center manager will move from magistrate to district court.

Stephen Christopher, the Air Center deputy director from March 2021 until his resignation Oct. 4, has not entered a plea in the case that alleges that he attempted to commit fraud over $2,500 regarding an Air Center lease, according to online court records. Christopher also waived the preliminary hearing set for Wednesday.

Chaves County Magistrate Judge K.C. Rogers ordered the case to be bound over and set for trial in the New Mexico 5th Judicial District Court, but no dates for hearings or a trial had been set by press time. The district court judge for the case also had not been designated.

Christopher was charged with a fourth-degree felony on Oct. 27. Police and prosecutors allege that he wrongly attempted to claim that a company he is said to own, Custom Graphics and More, had provided shirts, caps and other items to the city of Roswell and the Air Center. He reportedly told city officials that he did not owe past-due rent because the value of the items provided to the city exceeded the rent owed. He later paid the rent of $4,950.

Court records indicate that police interviews with various people at the Air Center could not find someone who said they had received the items shown in invoices or who could show the items to investigators. The court documents also indicate that police reported finding the invoices on a computer at the leased space, with computer data allegedly indicating that the invoices were created after Christopher had been notified about the need to pay the past-due rent.

Christopher chose not to comment on the case and a representative of his lawyer's office said no comment would be provided by the lawyer, either.

Demonstrators gather on South Main Street in July 2020 to protest against the public health orders of Gov. Michelle Lujan Grisham related to the COVID-19 pandemic. House District 59 state Rep. Greg Nibert, R-Roswell, said Tuesday he intends to reintroduce both legislation and a proposed state constitutional amendment to curtail the emergency powers Lujan Grisham used to issue public health orders in the early days of the pandemic.

Despite strong past opposition from Gov. Michelle Lujan Grisham and leading Democratic lawmakers, a local legislator confirmed Tuesday, ahead of the upcoming 60-day legislative session, that he will once again file legislation and a proposed constitutional amendment to curtail some of the governor's emergency powers.

“I've already got it drafted and it will be pre-filed in a few weeks,” state Rep. Greg Nibert, R-Roswell, told the Roswell Daily Record Tuesday in a phone interview about both the legislation and the House Joint Resolution.

The legislation is similar to bills and a House Joint Resolution Nibert and state Rep. Daymon Ely, D-Corrales have introduced during several past regular and special sessions since the start of the COVID pandemic in 2020.

During the 2021 Legislative session, Nibert and Ely introduced H.B. 139. Like other iterations of the proposals, it would end emergency declarations or public health orders after 90 days, unless the governor calls the Legislature into session to discuss circumstances, policy and the appropriation of funds related to the emergency.

Under the proposed legislation, lawmakers by a simple majority in each legislative chamber could move to amend, suspend or terminate an emergency declaration. The constitutional amendment would require a three-fifths majority to take such action on an emergency order.

A House Joint Resolution has also been introduced in the past along with that legislation that if passed would send a proposed state constitutional amendment to voters in a statewide election who would then be able to ratify or reject the amendment.

“That would be my intention to drop both and see if one or the other can get traction and see if we can get it across the finish line,” he explained.

The governor's broad emergency powers were a prime target for Republicans in the early days of the pandemic, who railed against restrictions on public gatherings, prohibiting in-person learning and suspending operations of businesses.

Lujan Grisham and leading Democrats in the Legislature have ardently opposed Nibert's proposals, arguing they could hinder a governor's ability to take decisive action in a statewide emergency that could save lives.

Others believe the proposals were little more than vehicles for conservatives to criticize the governor. Nibert denies the characterizations.

He says the need for the legislation is not about COVID-19 or undermining Lujan Grisham or any other governor, but remedying a law passed two decades ago that gave the governor greater power to handle emergencies.

“We need to fix the law that was passed so that if this ever comes up again, that we, as a body, have a seat at the table to represent the people who elected us to voice their opinions in the legislative process during emergencies that go on for long periods of time,” he said.

Nibert stated he believes a chief executive should have the authority and capacity to lead the state response to a disaster, but that authority has to also have its limits.

“When that emergency lasts for a significant period of time, then we as a legislative body should assume a seat at the table in dealing with the issues that effect the entire state moving forward,” he said.

Nibert and Ely in the 2021 60-day session, were able to get some support from their colleagues on advancing the measures, when in a 7 to 2 vote, the House State Government, Elections and Indian Affairs Committee passed the proposed constitutional amendment out of committee.

It then went to the House Judiciary Committee. clearing the committee, but without a "Do Pass" recommendation. The proposal did not make it to the floor before lawmakers adjourned.

Come this January, getting any kind of movement on either the legislation or proposed constitutional amendment, is something Nibert said will be an uphill battle.

“The issue for me going up to Santa Fe is, can I get some support and then can they get some of their colleagues support behind it,” Nibert said.

Absent a groundswell of backing from Democrats who continue to hold big majorities in the Legislature, and a softening of Lujan Grisham's previous opposition to the measures, Nibert acknowledges progress on either measure will likely be limited. “I suspect it is going to be a pretty tough road to get this very far down the line,” Nibert said.

Making things more challenging is the fact Ely, the lead Democrat backing the proposals, did not seek re-election this year and come January will no longer be in the Legislature. That means Nibert will have to find a new partner among Democrats. So far, he does not have many takers.

“The people that I've been talking to on the other side of the aisle, I'm not sure that that is one of their issues that they are willing to stick their neck out on,” Nibert said.

He added many of the mandates and restrictions put in place through the orders have been lifted and significantly relaxed. That, along with the fact COVID-19 no longer plays a prominent role in people's lives to the degree it did in 2020 and 2021, means some of the momentum may have stalled on the issue.

“I think that Republicans and Democrats have kind of put the emergency in the back of their mind. It is not at the forefront of their mind like it was a year and a half ago and we tend to forget about it,” he said.

Nonetheless, Nibert said that does not diminish the importance of tackling the issue. He believes his arguments and proposal will eventually prevail.

“I foresee that at some point in the future we will have that limitation in place, but I don't know if this will be the year for that or not. It may be a couple years down the road before we get it across the finish line,” Nibert explained.

A city commission has approved permits for the second and third potential community solar projects within city limits.

No objections from the public or nearby residents were made about the planned projects and city staff recommended approval with the set of conditions.

To move forward, the projects would have to be among the ones chosen by InClime, the state's third-party community solar administrator, following the Request for Proposal process that opens today (Dec. 1) and is set to close by Jan. 31. Only 200 megawatts of community solar is allowed statewide during the initial trial period that ends July 2024, and only 45 megawatts can be developed in the southeast region of New Mexico serviced by Xcel Energy, also known as Southwest Public Service. The county and city have received numerous requests for projects in the past months.

During a Tuesday night meeting, the city of Roswell Planning and Zoning Commission voted 4-0 to give special use permits to two companies.

Energy Management Institute based in Massachusetts and doing business as Roswell Plains Solar II is planning a 4.3 megawatt project on a 17.5-acre tract near the 3700 block of West Second Street, not far from the Roswell Relief Route. The land is owned by Lodewick Properties LLC of Dallas, Texas.

Impact Power Solutions, also known as New Energy Equity, based in Minnesota, wants to create a five megawatt project on about 35.8 acres near the 4500 block of West Alameda Street. That property is owned by Phelps and Ann Anderson of Roswell.

Community solar projects are intended to reduce greenhouse emissions, promote energy diversification and provide an affordable way for residents and businesses to benefit from solar energy by allowing them to subscribe to projects and receive reductions or rebates on their electric bills.

The commission also voted 4-0 to approve a rezone of two tracts from community commercial to RVP, or Recreational Vehicle Park. The tracts totaling about 9.9 acres do not have a street address but are in the 3000 to 3100 blocks of West Second Street, with West Juniper Street to the north. Amolak Singh is the property owner and has indicated that he intends to build a “recreational vehicle resort” and campground.

A local woman is dead following a Tuesday night rollover crash in Roswell.

In a press release issued Wednesday, Roswell Police stated that Desiree McMath, 35 of Roswell, died after being ejected from the 2007 Buick Lucerne she was driving on South Main Street near Burkett Road. She was then transported to a local hospital where she was soon pronounced dead.

Two males, ages 15 and 19 who were also in the vehicle were taken to a hospital with minor injuries and later released.

According to the press release, the accident happened at around 11 p.m, when McMath, who was driving north on S. Main St. lost control of her vehicle, which then rolled over before coming to rest against two other vehicles.

Roswell Police are continuing to investigate the accident.