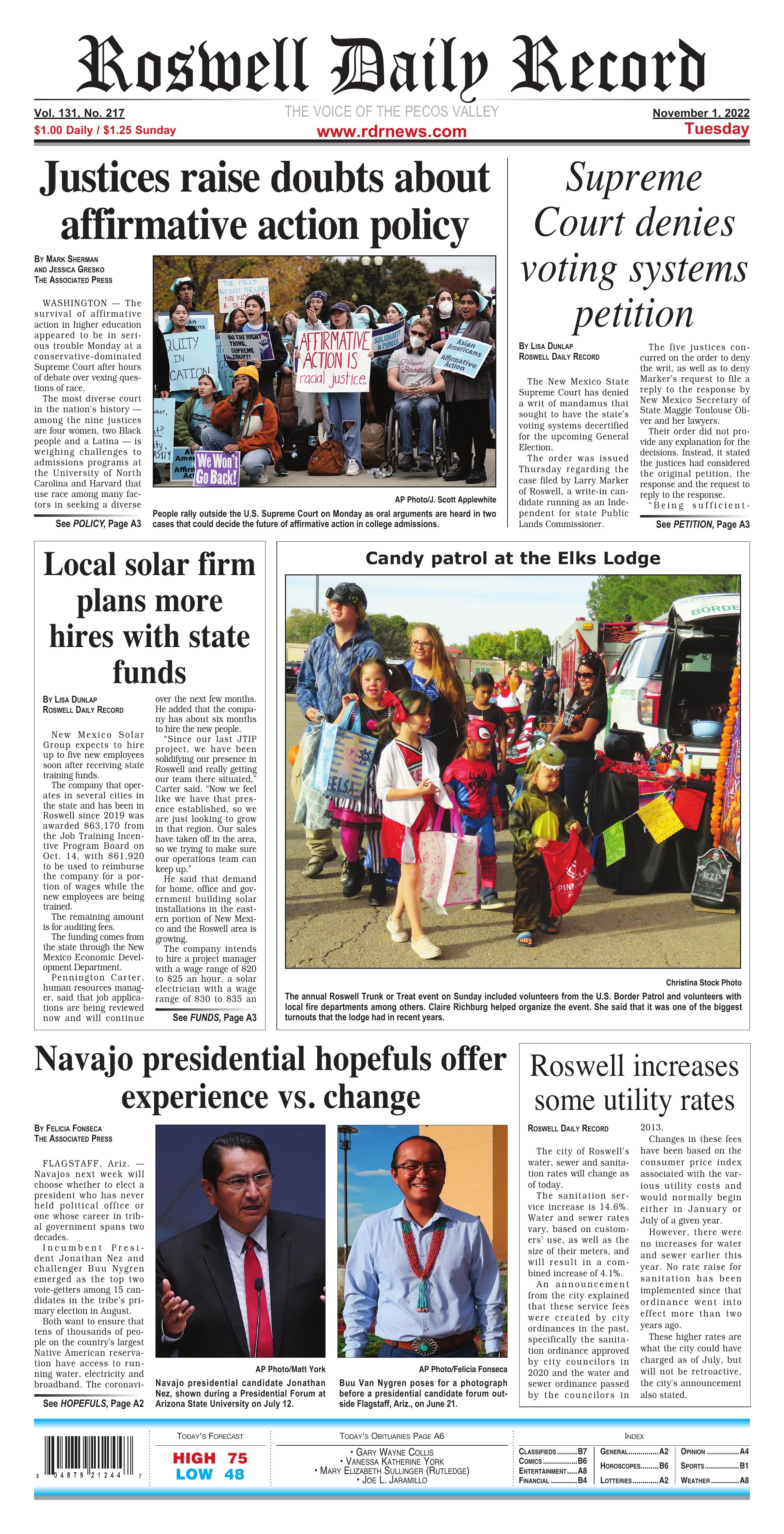 The New Mexico State Supreme Court has denied a writ of mandamus that sought to have the state's voting systems decertified for the upcoming General Election.

The order was issued Thursday regarding the case filed by Larry Marker of Roswell, a write-in candidate running as an Independent for state Public Lands Commissioner.

The five justices concurred on the order to deny the writ, as well as to deny Marker's request to file a reply to the response by New Mexico Secretary of State Maggie Toulouse Oliver and her lawyers.

Their order did not provide any explanation for the decisions. Instead, it stated the justices had considered the original petition, the response and the request to reply to the response.

“Being sufficiently advised,” the justices ordered Marker's petition and his request to reply be denied.

Marker said that he would do some research on the matter to decide what action, if any, to take regarding the Supreme Court case or a case he had filed Oct. 20 with the U.S. District Court of New Mexico.

The federal case asked for an emergency restraining order barring the use of the state's voting machines, and related software and hardware, until the Supreme Court made its decision.

Marker said the state issue is different than the legal issue before the federal court.

“The state issue is simply, what does the state statute say? The federal action is that the state isn't enforcing state law,” he said.

In his original petition with the state Supreme Court, Marker argued that the current voting tabulators and related systems are unfair and inequitable for several reasons. Those reasons include the debate over whether they are properly certified according to state law and Marker's question about their ability to accept various styles of ballots.

Marker also alleged that the separation of ballots with write-in votes into segregated bins in the tabulators are unfair to write-in candidates. The separate bins can hold only an estimated 150 to 200 ballots, which Marker said raises questions of whether the segregated bins will be properly checked by county clerk offices and their election bureau staff, and if overflowing bins could cause some write-in ballots to be uncounted.

Lawyers for Toulouse Oliver filed a response on Sept. 30 indicating that all voting systems are certified in compliance with federal and state laws and were approved for use for elections, including the 2022 General Election, in August 2021, by the bipartisan Voting Security Certification Committee.

The response stated that the voting machines and equipment have “proven reliable and accurate” in pre- and post-election testing and are able to handle many different ballot formats, with the Dominion 5.4 systems able to handle all the various ballots in use by the largest voting jurisdiction the U.S.

The Secretary of State's filing also stated that write-in bins have never been known to have exceeded their capacities or to have caused difficulties for write-in candidates.

Alex Curtas, communications director for the Secretary of State Office, said the agency was pleased with the decision and it affirmation that "New Mexico’s voting systems are following all state and federal laws."

"New Mexico voters should have the utmost confidence in the integrity of our voting systems and we encourage all eligible voters to participate in the ongoing General Election and to use trusted sources for election information," Curtas said.

The company that operates in several cities in the state and has been in Roswell since 2019 was awarded $63,170 from the Job Training Incentive Program Board on Oct. 14, with $61,920 to be used to reimburse the company for a portion of wages while the new employees are being trained.

The remaining amount is for auditing fees.

The funding comes from the state through the New Mexico Economic Development Department.

Pennington Carter, human resources manager, said that job applications are being reviewed now and will continue over the next few months. He added that the company has about six months to hire the new people.

“Since our last JTIP project, we have been solidifying our presence in Roswell and really getting our team there situated,” Carter said. “Now we feel like we have that presence established, so we are just looking to grow in that region. Our sales have taken off in the area, so we trying to make sure our operations team can keep up.”

He said that demand for home, office and government building solar installations in the eastern portion of New Mexico and the Roswell area is growing.

Carter said that the Roswell operations of the company has nine employees.

“The employees we do have there, the majority of them, were hired on under a prior JTIP project,” Carter said. “They are going to be doing a lot of training for the solar guys and the project manager.”

Statewide the company has 115 employees and another 30 or so contractors, Carter said. It has installed about 2,000 systems since it opened in 2015 and has other offices in Albuquerque, Albuquerque, Las Cruces, El Paso and Alamogordo.

Mike Espiritu, president of the Roswell-Chaves County Economic Development Corp., supported the company's JTIP application at the board meeting. Statewide, New Mexico Solar Group has received five JTIP awards, returning the funds on one awarded in 2019 when, according to Carter, it decided that it was not yet prepared for the training funds and all it entailed.

Espiritu said that, in addition to the employment opportunities the company brings to the area, the company works closely with Eastern New Mexico University-Roswell, funding scholarships to train people to enter the solar industry.

According to Find Energy, a research and data site, New Mexico generates about 4.87% of its electrical power from solar. 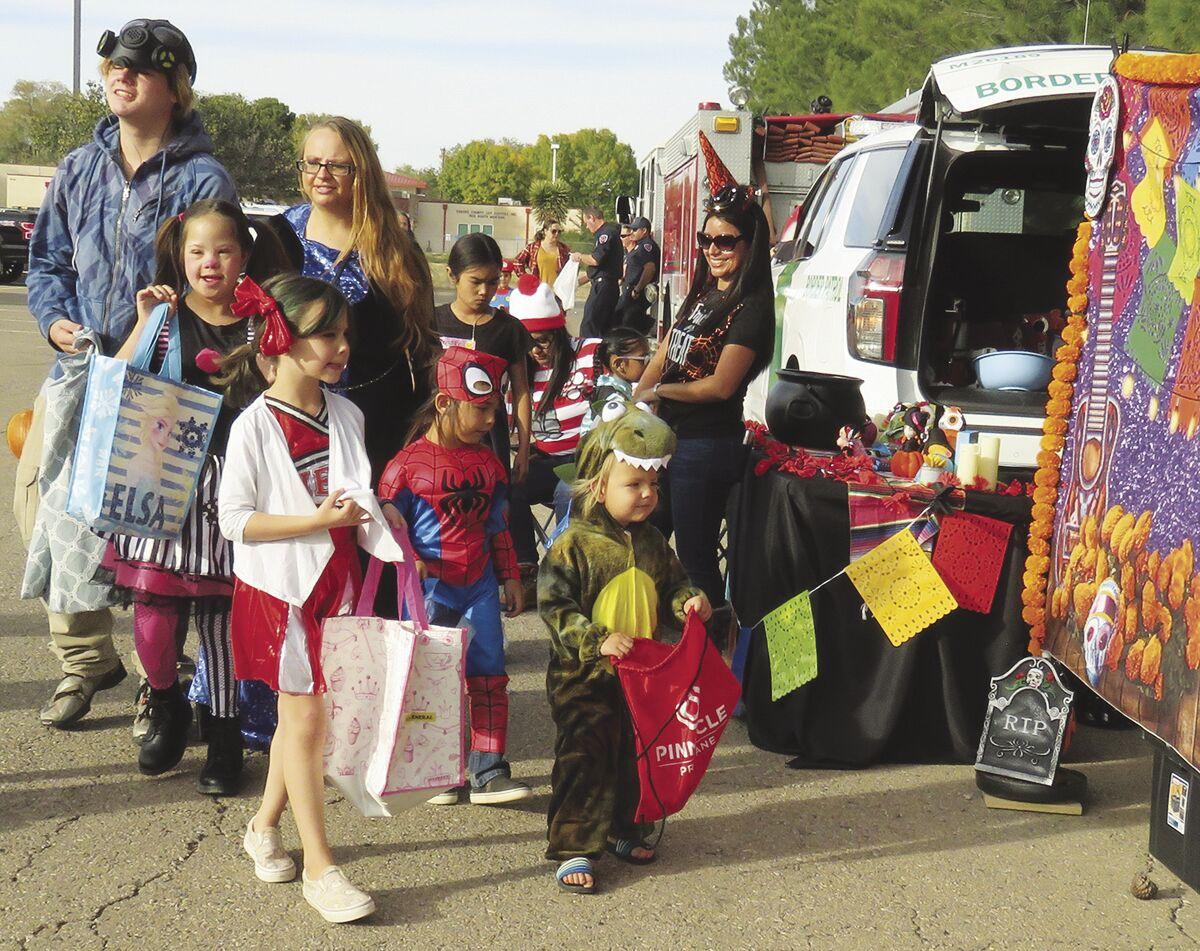 The annual Roswell Trunk or Treat event on Sunday included volunteers from the U.S. Border Patrol and volunteers with local fire departments among others. Claire Richburg helped organize the event. She said that it was one of the biggest turnouts that the lodge had in recent years.

Buu Van Nygren poses for a photograph before a Navajo Nation presidential candidate forum at a tribal casino outside Flagstaff, Ariz., on June 21.

FLAGSTAFF, Ariz. — Navajos next week will choose whether to elect a president who has never held political office or one whose career in tribal government spans two decades.

Incumbent President Jonathan Nez and challenger Buu Nygren emerged as the top two vote-getters among 15 candidates in the tribe's primary election in August.

Both want to ensure that tens of thousands of people on the country's largest Native American reservation have access to running water, electricity and broadband. The coronavirus pandemic highlighted the lack of basic services across the Navajo Nation and led to more than $2 billion being allocated by the federal government, some of which will fund infrastructure projects.

Nez ascended to the presidency after serving as a community leader, council delegate, county supervisor and tribal vice president. He has infused Christianity into the job while promoting a resurgence of Navajo culture and language, particularly during the pandemic when Navajos were encouraged to stay on the reservation.

Nygren was thrust into the political scene four years ago when Joe Shirley Jr. picked him as his running mate after Shirley's initial choice didn't pan out. Nez got nearly twice as many votes as Shirley, denying him a third term in office. Nygren resigned from a job in construction management to seek the tribal presidency.

More than 126,000 Navajos are registered to vote in the tribe's general election on Nov. 8 that will also determine the makeup of the 24-member Navajo Nation Council — often seen as more powerful than the presidency.

Nez and Nygren are limited to raising about $180,000 each for the nonpartisan race, including the primary. Donations can come from Navajos only.

Radio plays a huge role in campaign advertising because of the remoteness of the vast 27,000 square-mile (70,000 square-kilometer) reservation. Candidates also spend countless hours on the road meeting with voters in tribal communities and off the reservation.

The tribe has the largest land base by far of any other Native American tribe in the U.S. and its population of about 400,000 is second only to the Cherokee Nation of Oklahoma.

Nez selected law school graduate Chad Abeyta as his running mate. Nygren chose Richelle Montoya, president of a Navajo chapter on the New Mexico side of the reservation. The tribe has never elected a woman as president or vice president.

Nygren's energy in some ways resembles what Nez exhibited in the 2018 election where he positioned himself as a young candidate ready to work on a to-do list generated by talking with Navajo voters. Nez's tone is more measured now, as he works to assure Navajos that progress is being made but takes time.

At a recent debate at Arizona State University, Nygren suggested Nez's administration has moved too slowly on negotiating water rights in Arizona and establishing an office in Phoenix to serve urban Navajos. He also criticized the president for what he said was needless spending on a tribal office in Washington, D.C. and the purchase of property off the reservation.

"If you're losing faith and hope that we can have a better future for tomorrow, then you should step aside," Nygren said to Nez at the debate. "But as your next Navajo Nation president, I am full of hope with aspiration for a better Navajo Nation."

Nez countered that Nygren doesn't understand how tribal government operates and hasn't built a network of local, state and federal leaders to advocate for funding and other resources for the Navajo Nation.

Nez also has pushed back on assertions that his administration was too strict in implementing measures during the pandemic in which more than 1,900 Navajos have died. Nez's administration ordered lockdowns, curfews and other restrictions.

Businesses on the Navajo Nation haven't fully reopened, partly because of the confirmed monkeypox cases, Nez said. The cases are described as numbering as "less than a handful," Nez said.

"We took our sovereignty seriously," he said in an interview. "We have the ability to govern ourselves, and we kept that mask mandate in place. And if you ask Navajo people, they'll say we had to do that to keep our people safe during the pandemic, and they accepted that."

The city of Roswell's water, sewer and sanitation rates will change as of today.

The sanitation service increase is 14.6%. Water and sewer rates vary, based on customers' use, as well as the size of their meters, and will result in a combined increase of 4.1%.

Changes in these fees have been based on the consumer price index associated with the various utility costs and would normally begin either in January or July of a given year.

However, there were no increases for water and sewer earlier this year. No rate raise for sanitation has been implemented since that ordinance went into effect more than two years ago.

These higher rates are what the city could have charged as of July, but will not be retroactive, the city's announcement also stated.