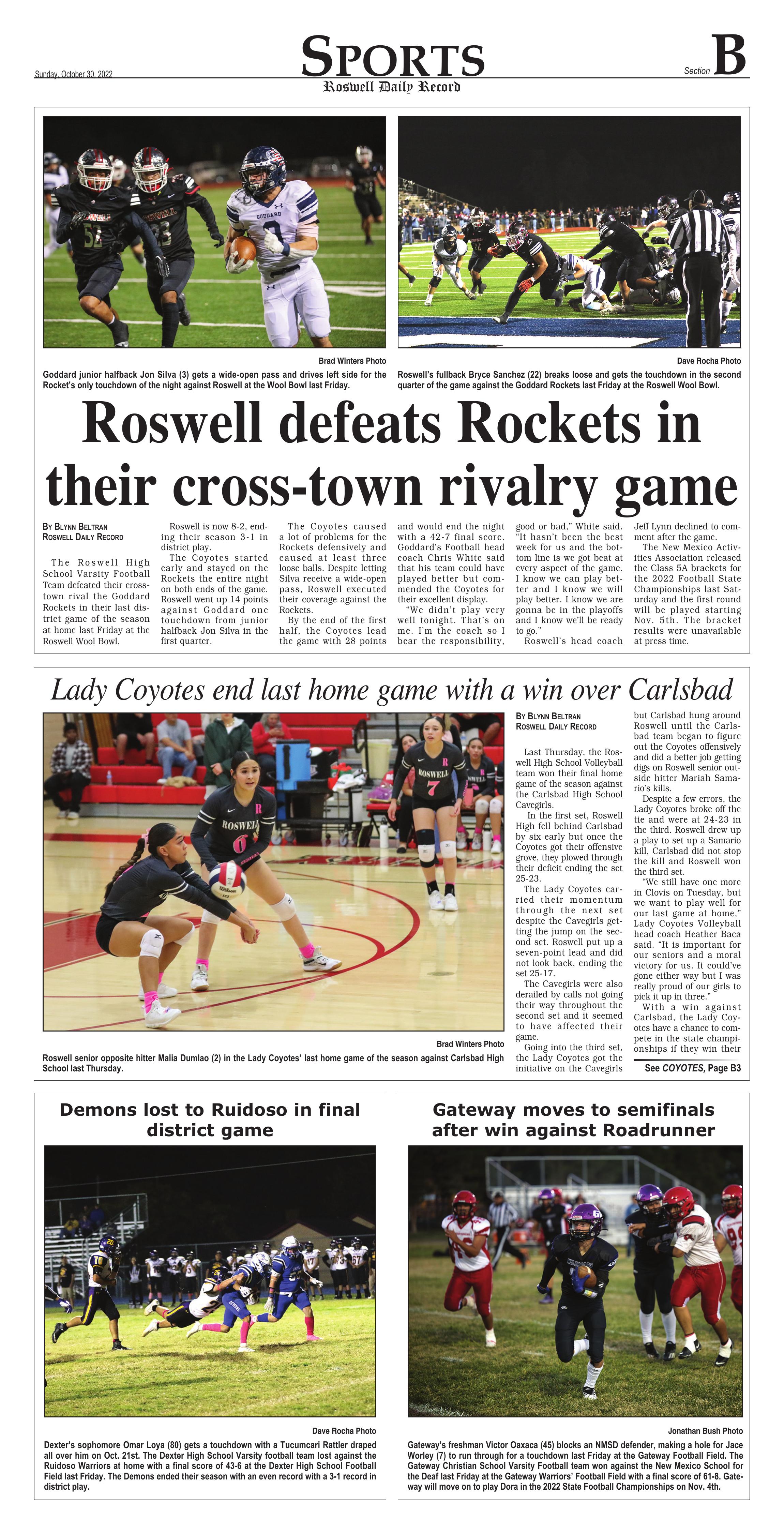 Goddard junior halfback Jon Silva (3) gets a wide-open pass and drives left side for the Rocket's only touchdown of the night against Roswell at the Wool Bowl last Friday.

Roswell's Jovanni Apodaca (30) breaks a tackle and runs in to score in their cross-town rivalry game against the Goddard Rockets last Friday at the Wool Bowl.

Roswell's quarterback Manny Fuentez (not pictured) throws a pass on the 4th down to Roswell receiver for a 42-yard pass in the final quarter of their game against Goddard High School last Friday.

Roswell's fullback Bryce Sanchez (22) breaks loose and gets the touchdown in the second quarter of the game against the Goddard Rockets last Friday at the Roswell Wool Bowl.

The Roswell High School Varsity Football Team defeated their cross-town rival the Goddard Rockets in their last district game of the season at home last Friday at the Roswell Wool Bowl.

Roswell is now 8-2, ending their season 3-1 in district play.

The Coyotes started early and stayed on the Rockets the entire night on both ends of the game. Roswell went up 14 points against Goddard one touchdown from junior halfback Jon Silva in the first quarter.

The Coyotes caused a lot of problems for the Rockets defensively and caused at least three loose balls. Despite letting Silva receive a wide-open pass, Roswell executed their coverage against the Rockets.

By the end of the first half, the Coyotes lead the game with 28 points and would end the night with a 42-7 final score. Goddard’s Football head coach Chris White said that his team could have played better but commended the Coyotes for their excellent display.

“We didn’t play very well tonight. That’s on me. I’m the coach so I bear the responsibility, good or bad,” White said. “It hasn’t been the best week for us and the bottom line is we got beat at every aspect of the game. I know we can play better and I know we will play better. I know we are gonna be in the playoffs and I know we’ll be ready to go.”

The New Mexico Activities Association released the Class 5A brackets for the 2022 Football State Championships last Saturday and the first round will be played starting Nov. 5th. The bracket results were unavailable during the editorial.

The Roswell High School Varsity Volleyball team celebrates after taking a two-point lead against Carlsbad in the second set of their final home game of the season. The Lady Coyotes would win the game by winning three sets against the Cavegirls.

Roswell High School senior middle blocker Analiese Casey (13) against Carlsbad High School in their last home game of the season. Casey missed the majority of her season due to an injury but helped contribute in her return in district.

In the first set, Roswell High fell behind Carlsbad by six early but once the Coyotes got their offensive grove, they plowed through their deficit ending the set 25-23.

The Lady Coyotes carried their momentum through the next set despite the Cavegirls getting the jump on the second set. Roswell put up a seven-point lead and did not look back, ending the set 25-17.

The Cavegirls we also derailed by calls not going their way throughout the second set and it seemed to have affected their game.

Going into the third set, the Lady Coyotes got the initiative on the Cavegirls but Carlsbad hung around Roswell until the. The Carlsbad team began to figure out the Coyotes offensively and did a better job getting digs on Roswell senior outside hitter Mariah Samario’s kills.

Despite a few errors, the Lady Coyotes broke off the tie and were at 24-23 in the third. Roswell drew up a play to set up a Samario kill, Carlsbad did not stop the kill and Roswell won the third set.

“We still have one more in Clovis on Tuesday, but we want to play well for our last game at home,” Lady Coyotes Volleyball head coach Heather Baca said. “It is important for our seniors and a moral victory for us. It could’ve gone either way but I was really proud of our girls to pick it up in three.”

With a win against Carlsbad, the Lady Coyotes have a chance to compete in the state championships if they win their last district game against Clovis on the road. However, it all depends on the other district team's performance and Baca said it is still a long shot.

“It’s important for us in terms of competing but as far as making it to the playoffs, it’s a long shot. We needed to beat Hobbs in order to do that,” Baca said. “So now, we’re just playing to compete for each other and finish our season strong.”

“It feels great, I’m very proud of all of us. We worked well as a team and that’s how we accomplished all of our wins,” Enriquez said. “It feels great to win our last home game.”

The parent of senior Malia Dumlao, Debbie Dumlao, was in tears after seeing her daughter and the rest of the Lady Coyotes win this game against Carlsbad. With some luck, Debbie said that she hopes to see the team in the playoffs one more time.

“It is sad and exciting to see her finish her senior year with a win at home,” Debbie Dumlao said. “This is great and I hope they win their game against Clovis, and I see them play in state one more time.” 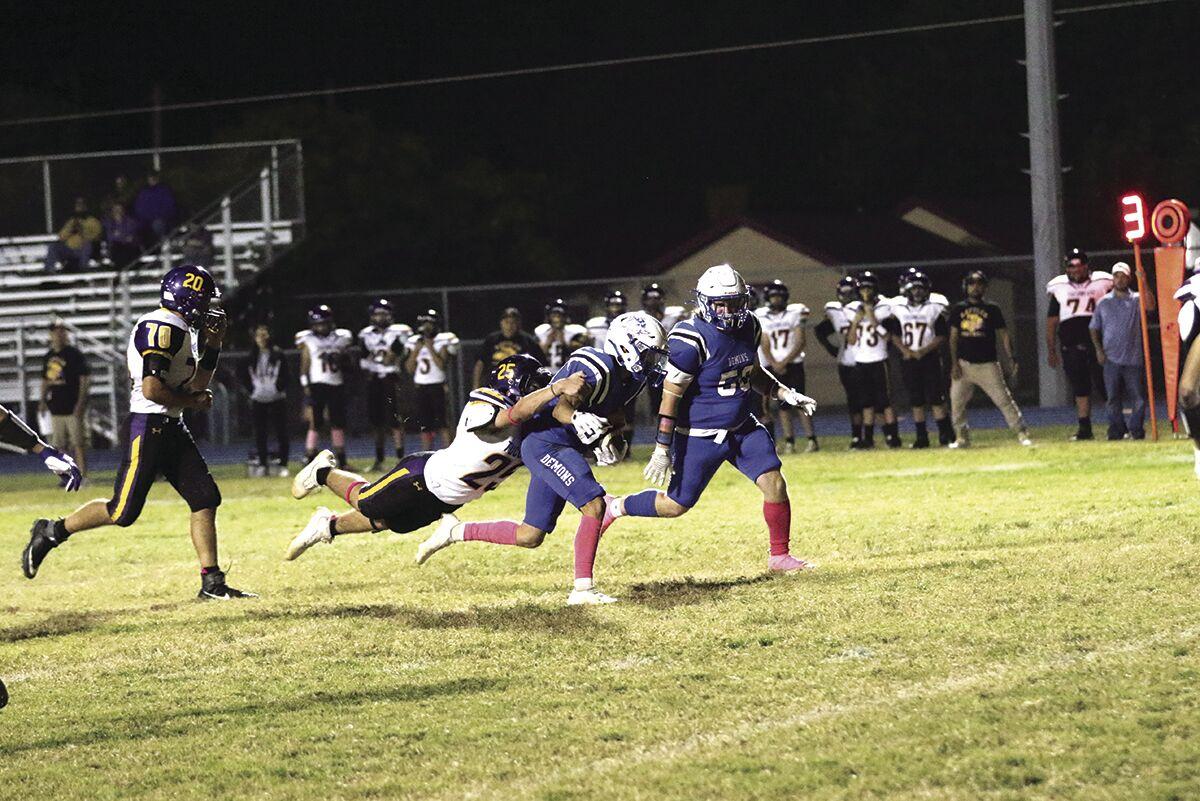 Picture: Dexter's sophomore Omar Loya (80) gets a touchdown with a Tucumcari Rattler draped all over him on Oct. 21st. 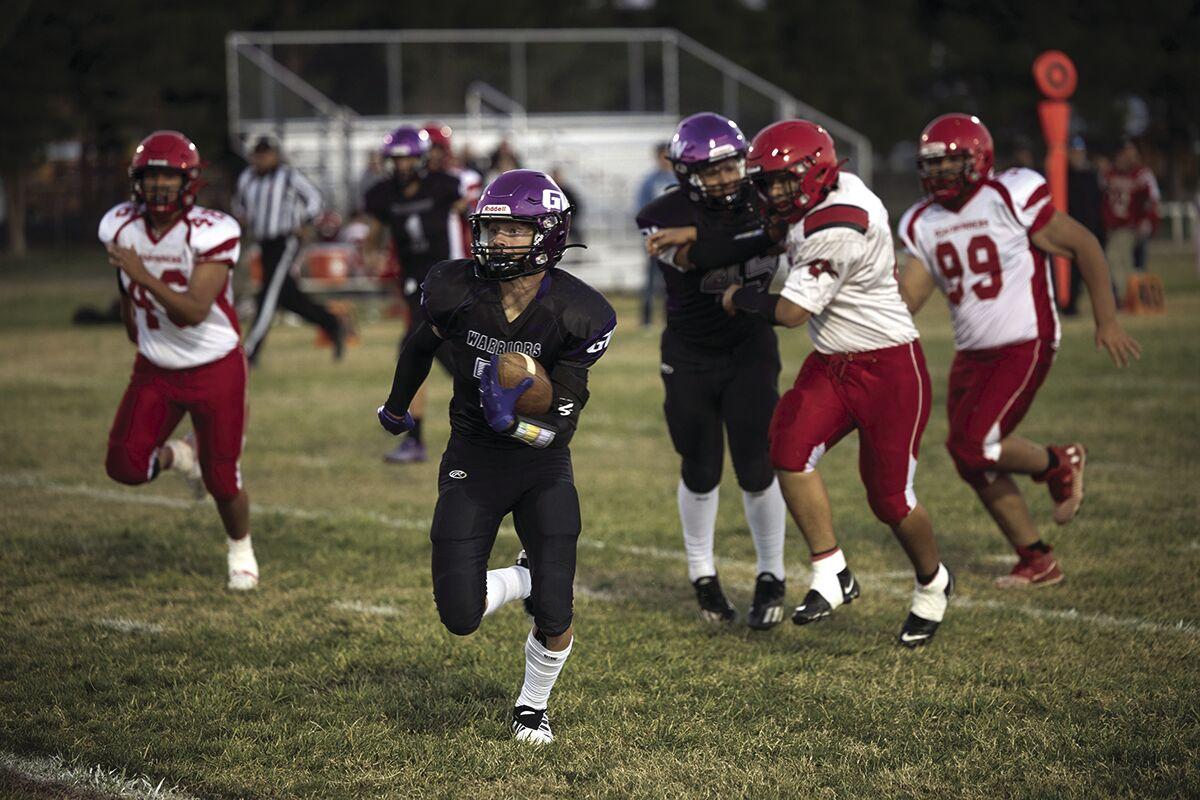 The Gateway Christian School Varsity Football team won against the New Mexico School for the Deaf last Friday at the Gateway Warriors' Football Field with a final score of 61-8. Gateway will move on to play Dora in the 2022 State Football Championships on Nov. 4th.

Picture: Gateway's freshman Victor Oaxaca (45) blocks an NMSD defender, making a hole for Jace Worley (7) to run through for a touchdown last Friday at the Gateway Football Field.